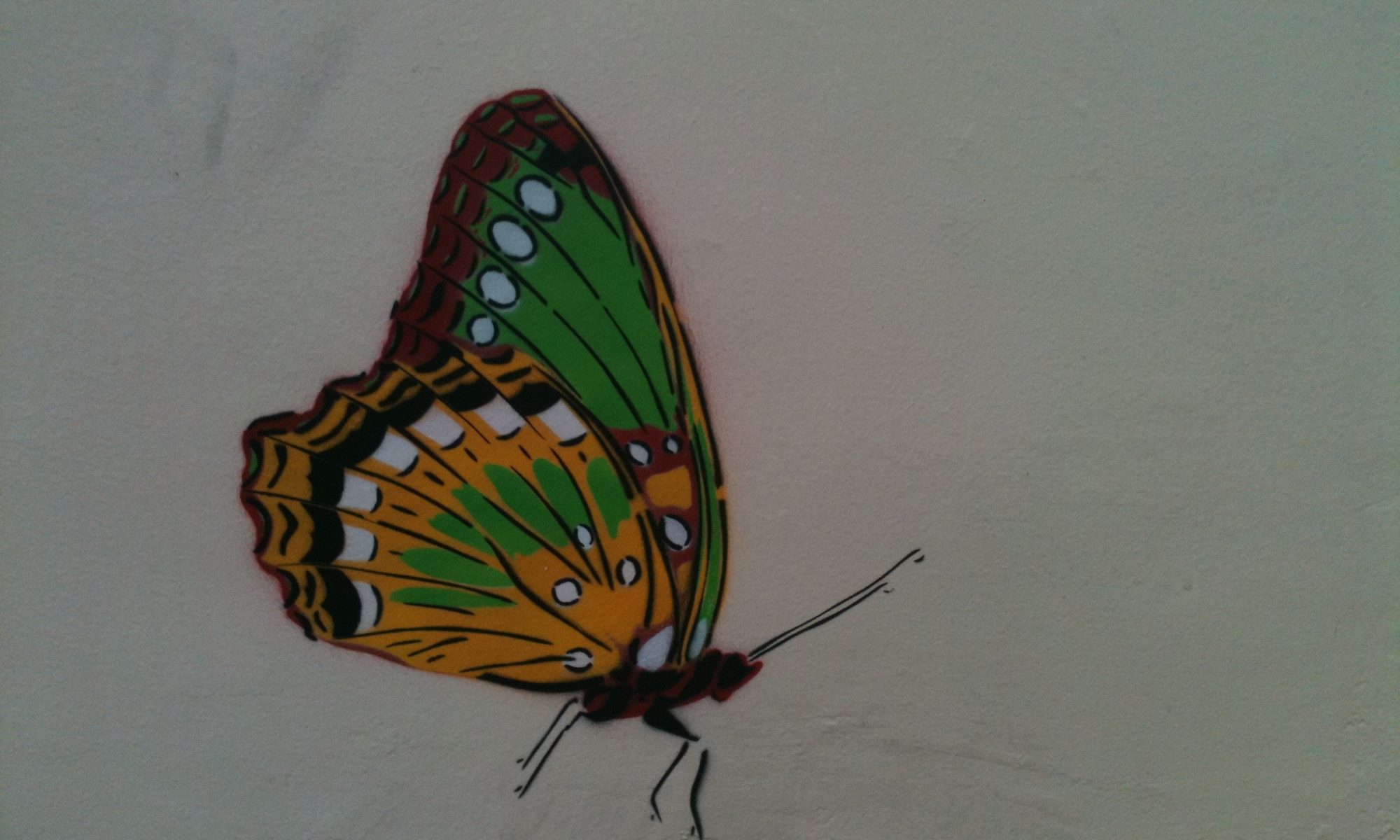 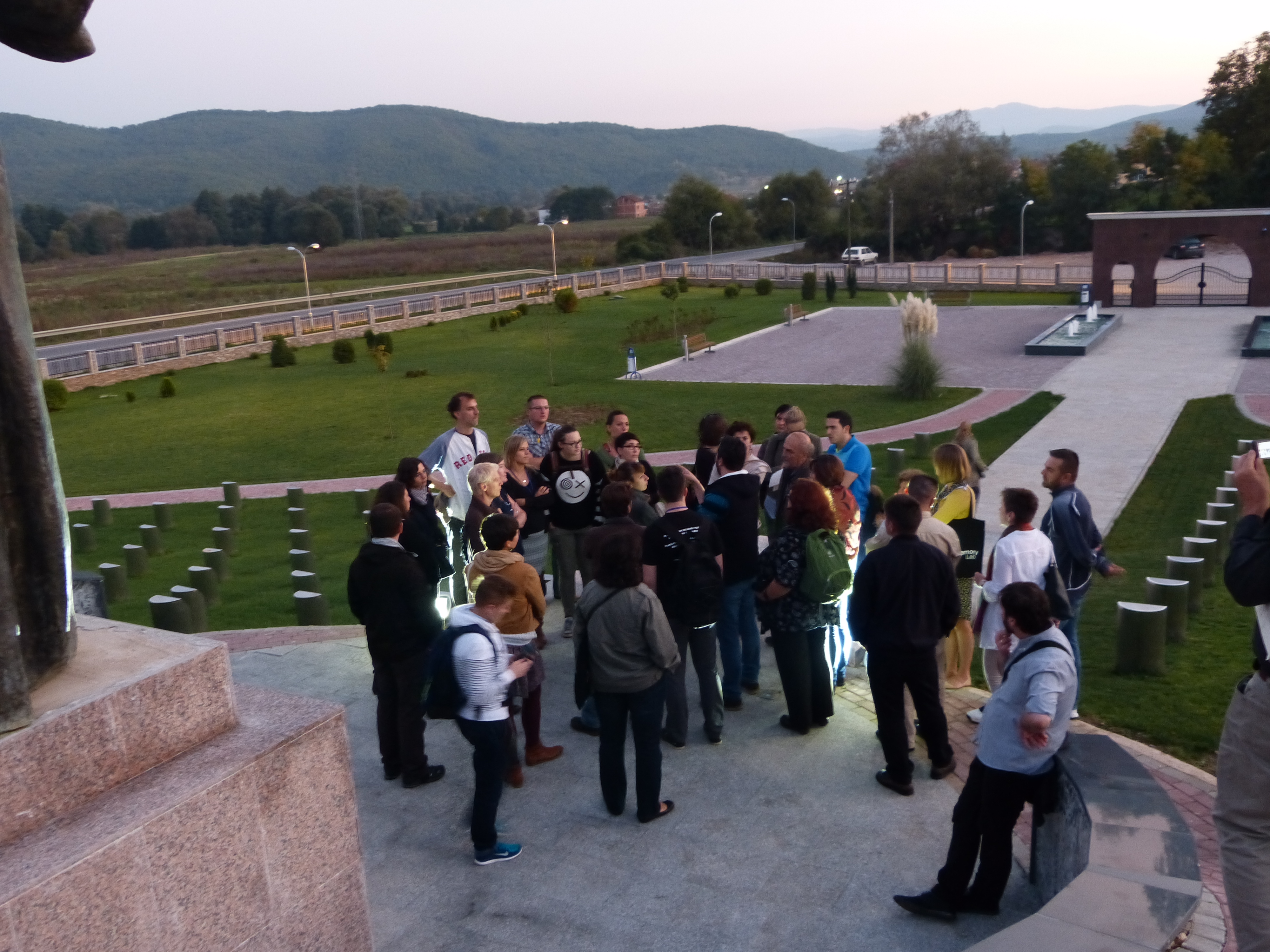 Memory Lab is a network of European exchanges that focuses on how to tell and explain the mass crimes of the twentieth century (through writing, filming, documenting, or civil society activities engaging with younger audiences). Each year, we visit together a country and explore how it tells and assumes its history. Within Memory Lab, I am not behind the camera. I take pictures, I engage and speak with all the participants, I investigate.

In a taxi between Kosovo and the Serbia (travel diary, 2013) 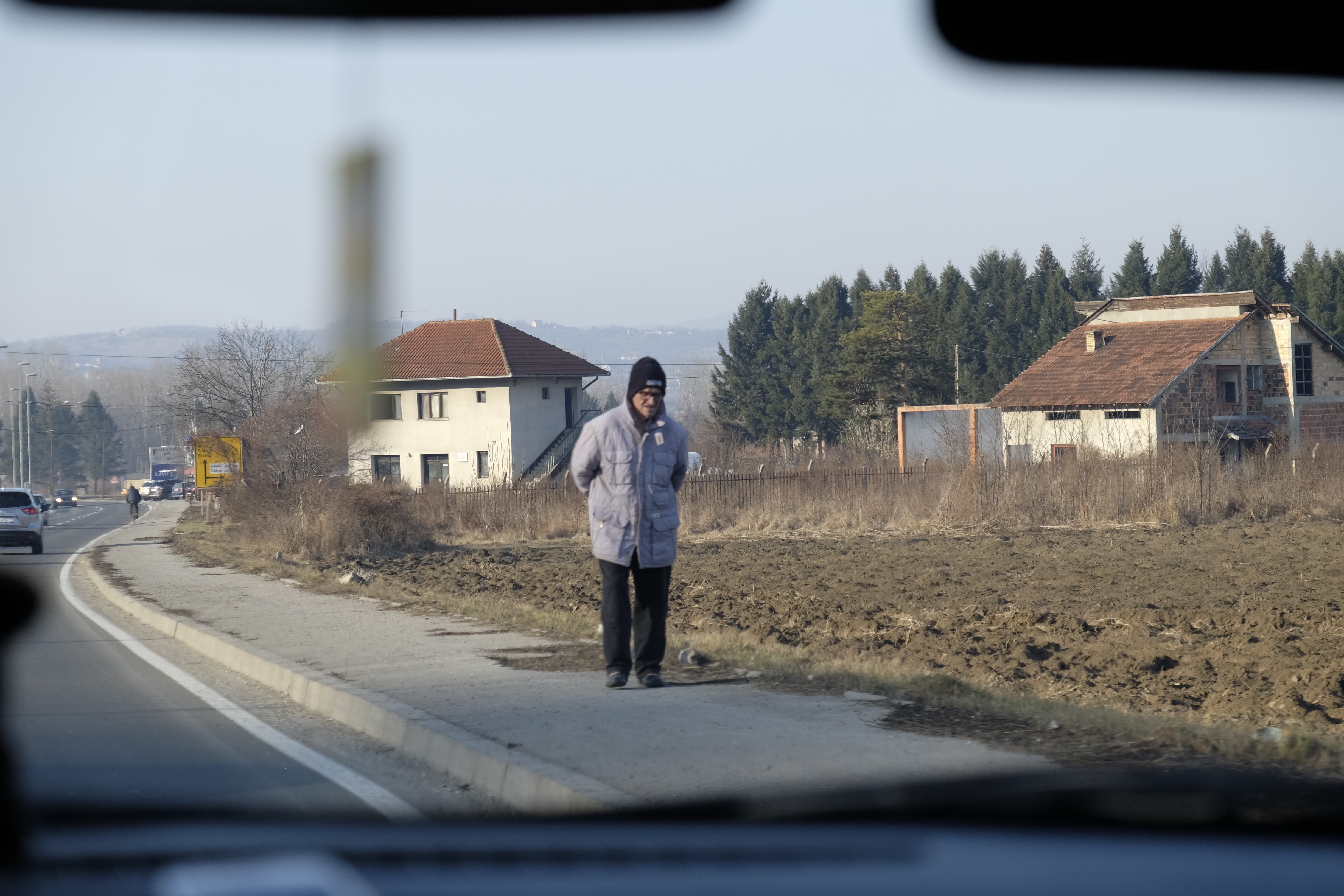 It is February. I travel by taxi from Kraljevo, a city in the center of the Serbia, to Kosovo, with Shpresim, an Albanian Kosovar, who works for an NGO. We went together to Serbia for a meeting. Shpresim doesn’t like to go to Serbia. But he does his work with heart and he lets his feelings aside. He is very polite, jovial; he also speaks perfectly French, with a Belgian accent and Serbian-Croatian-Bosnian. He can therefore speak with strangers, whether they are hated neighbors or not. On the way there, border crossings had been complicated: we had to show waivers from the Department of the Serbian Interior which does not recognize Kosovo and so neither its stamps nor passports. We have five hours in front of us. In these extended journeys, informal chatter inevitably initiates. One always ends up speaking more than one would want, carried away by the body that relaxes and the spirit that wanders. Shpresim and Dragan, our Serbian driver, chat. The two men, identified as obvious enemies by the patterns of the wars of the 1990s, progressively exhaust all the usual subjects of two ex-Yugoslavians who do not know each other (it is a fluid sequence, as in a well known partition, movements and breaths followed, without false note but without surprise, it is everywhere the same, regardless of the location in former Yugoslavia or the nationality of the protagonists). The topics of discussion are, in order:
1) football teams, sports, the next games, tournaments, the players, their wages;
2) and it’s hard today, unemployment, life is so expensive, wages are miserable, and pensions, it goes, “my cousin”, “Auntie”, fortunately there is the family abroad who sends us money, politicians them, they do not know the difficulties of life, all corrupt;
3) and it was so much better under Tito: peace, life was beautiful, one lacked nothing, one could go from one end of Yugoslavia to the other, we had a great and beautiful country, and passports, and the ability to travel without a visa, we were so happy.
4) and when I think about the fact that Romania, Romania! (subtext: redneckst!) has entered the European Union before “us” (us, the “Yugoslav”), it is unthinkable.
Usually, after this immutable sequence, which I have heard dozens of times, there is an awkward, lasting, silence that one does not know how to break. Because both know. All consensual topics have been addressed. There’s only one subject that was left unspoken, a big one: the war. Here too, the silence. And then, all of a sudden, Shpresim and Dragan begin to speak, each tells his war with great pain and great gentleness too. Each tells his sadness and his suffering. And they listen to each other. And I am listening too, I have goose bumps, my chest tightens. This is a unique moment. In this old taxi which drives to Mitrovica, on empty and deserted roads, that are nonetheless filled with memories. These 5 hours flew through our fingers. We have already arrived at the bridge of Mitrovica, which symbolizes the division between the North and the South of Kosovo and that no Serbian car ever thinks of crossing – everyone crosses this bridge by foot and steps into another car on the other side. Shpresim said to Dragan, “go ahead, passes through”. We are moving silently on the forbidden bridge and on the other side another cab is waiting for us. It’s a Kosovar Albanian taxi who will lead us to Pristina. We get off the car, Dragan comes out to give us our suitcases, and then Shpresim introduces Dragan to the Albanian driver so that they shake hands and he says simply: “this is Dragan, my friend.” That’s all. No outburst. But an immense emotion. I don’t know if they will meet again, but a gate opened. 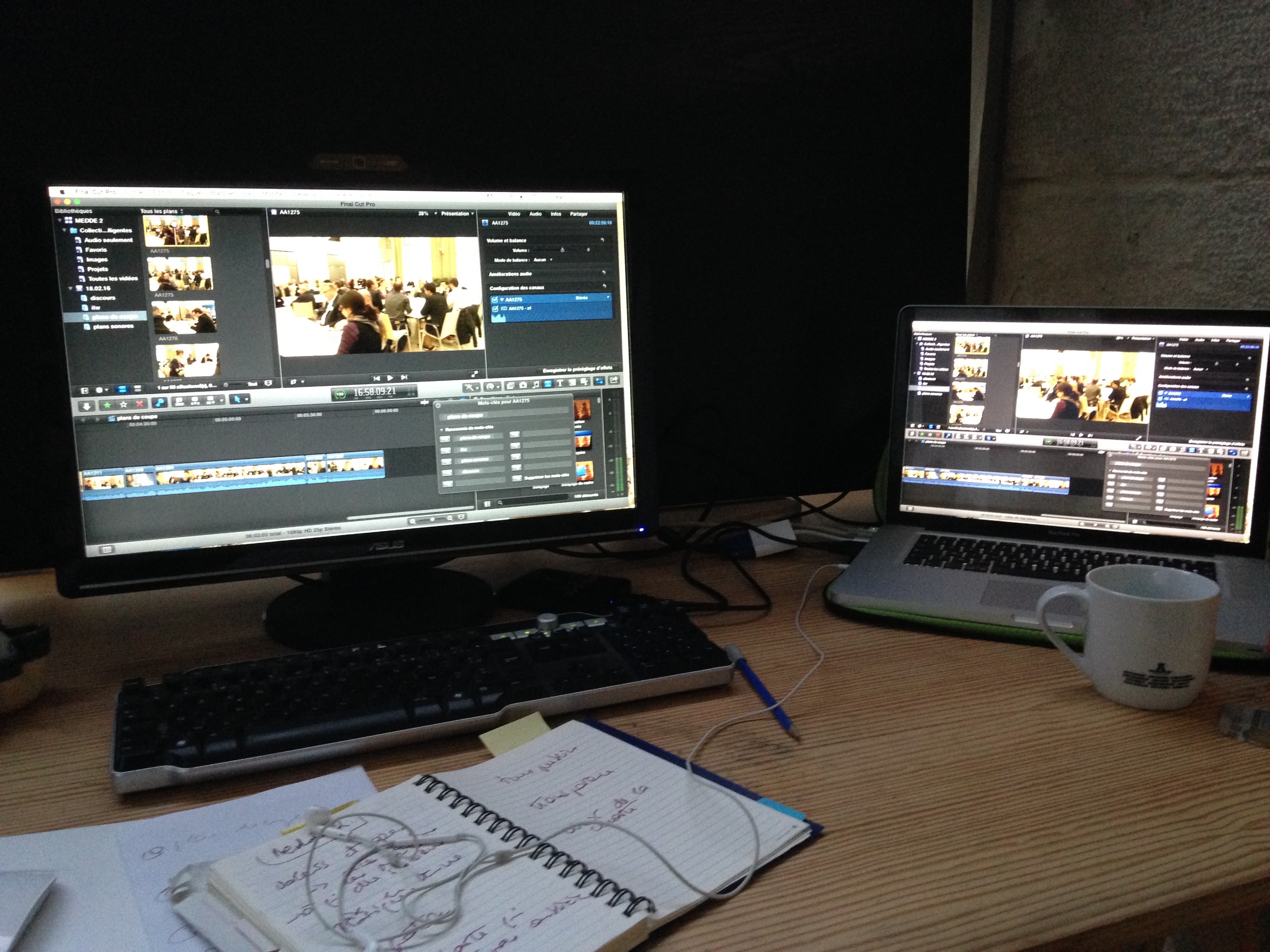 The wall is blue like an orange(text published on Arte for the twentieth anniversary of the fall of the wall, 2009) 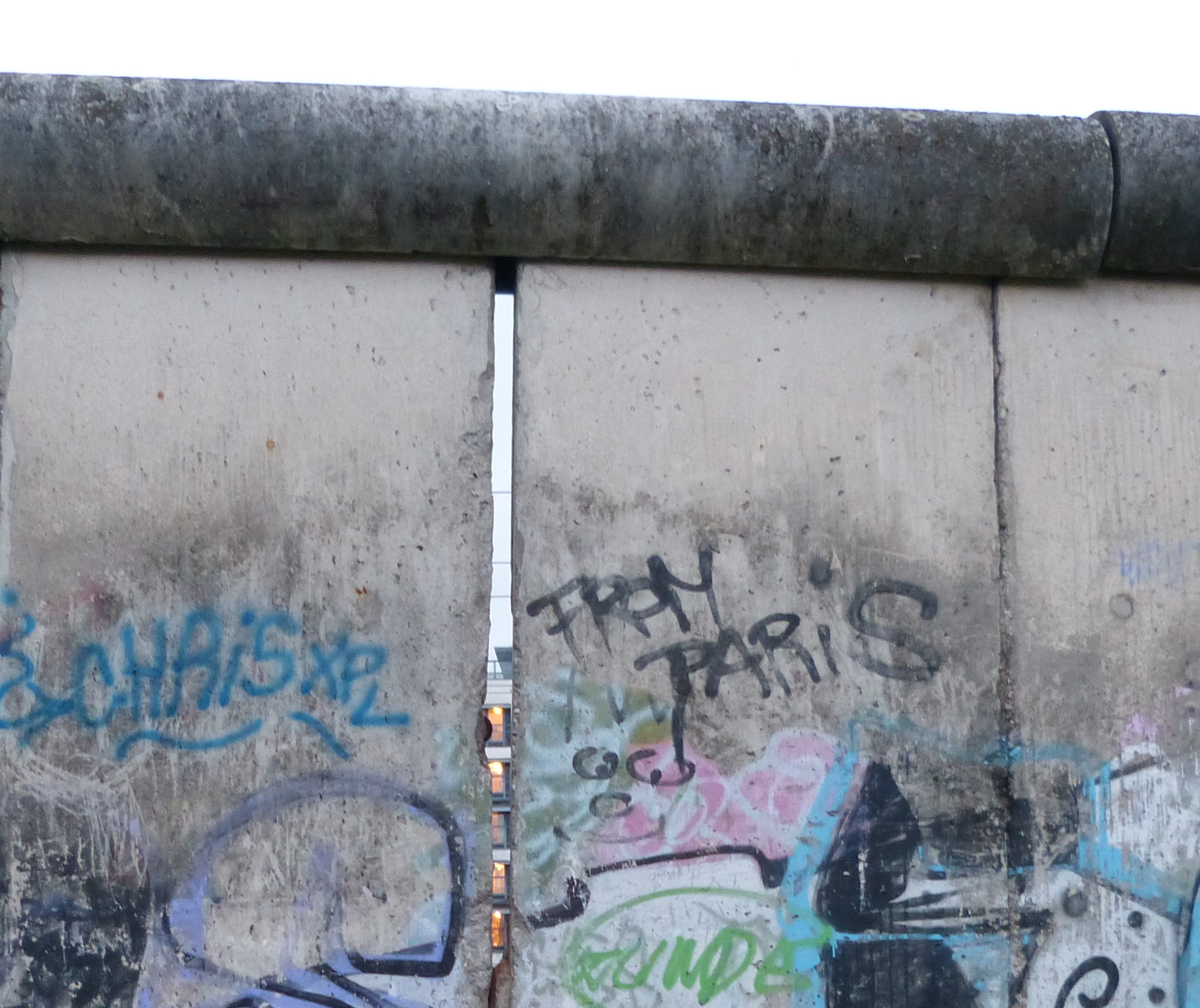 The fall of the Berlin wall, this is the beginning of my political consciousness. The reappropriation of my German history. A window that opens onto the hidden and silent memory of my mother. The moment I will be able to go to Schöneweide, the places of her childhood. My greatest childhood dream. Drops of emotion that abound. Watch again and again the images on TV and feeling rage in my stomach to not be standing on the wall that night.
The fall of the Berlin wall, it belongs to me, it is part of my life. It’s a snub at my history, my heritage, my Eastern European roots. It’s a moment when everything seems possible. It is the ability to love. The dream I did not dare formulate. The possibility, bolder than everything I had envisioned, of a Europe which was not only a political idea but something concrete and palpable. A huge victory over hatred.
November 9, 89, I am with very good friends of Yugoslavian origin – through whom I would meet the man who is at my side. I do not know – and neither do they for that matter – they will be soon seen as traitors for their denunciation of ethnic cleansing in the Balkans. It is with them, at their home, that I am celebrating the fall of the wall. They couldn’t be better company. We speak the same language, we feel the same things. We’re all from “out there”. I have shivers the entire evening. I am unable to take my eyes off the television. I’m calling my mother. I’m not only overwhelmed, this is my world that is being redrawn.
At the time of the fall of the wall, so, after my mother, my first thoughts go to my paternal grandparents (Hungarians, those who had not left in 1956, those who had chosen to stay because it was their lives). Instantly, they become more accessible, between us and them, the wall has fallen. I remember very precisely, I thought “we won’t need to bring them oranges anymore”. It is absurd, the Berlin wall falls, and oranges come rolling into Budapest. Strangely I think of them and not of members of my German family, who lives in Hamburg since their escape. It is as if it did not really affect them, as if they could not understand, as if for them, nothing would really change.
The fall of the wall, this isn’t only a German history, this is for me an Eastern European history. The night of the fall of the wall, I shake at the idea that it would disappear, that there would be nothing left of it. I want remaining traces of the wall. I stick to this idea. This fear never left me, as I would fear the idea of the destruction of a house where I spent part of my childhood. As a child, then as a teenager, die Berliner Mauer fascinated me. As an adult, I share it with my beloved, I take my kids to see its traces, I tell you.
It is no longer standing but it is part of my heritage, strangely heavy and painful. Not a trip to Berlin without my checking that it is still there and that I can touch it.